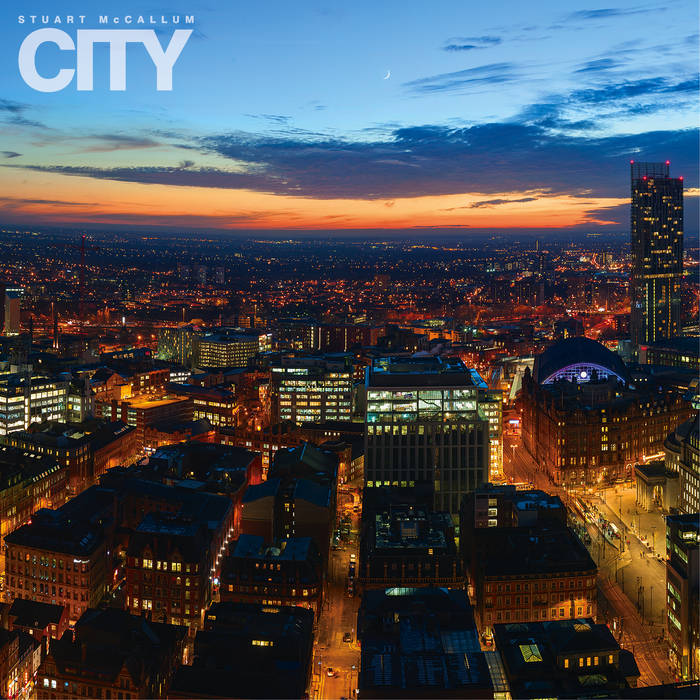 Ketan Hazari IMO, this song is the epitome of the artists' intention of spacing out sounds to allow them to breathe and expand on their own. The main body of the song is stellar. Favorite track: T-Onics.

“Liberally coated in chill-out and even folky atmospheres City is a record that also has a strong vocals input. But there’s also organic acoustic guitar currents flowing in like a hidden river under some concreted-over flyover” - Marlbank

"deserves to be widely heard and appreciated" - All About Jazz

“Some music is at its best after dark; after all, night is the time for introspection, and this, guitarist Stuart McCallum’s second album for Naim Jazz, is a case in point: we’re truly talking about 3.00am levels of introspection.” - London Jazz

The beautiful ambient-electronica-jazz soundscape City is the new album from Manchester guitarist and composer Stuart McCallum and his second studio album for Naim. City features a handful of seasoned musicians including McCallum on guitars, Robin Mullarkey, bass (ESKA, Roisin Murphy), Sean Foran (Trichotomy), Rhodes and Richard Spaven (Flying Lotus, José James) drums, synths and electronics. Violinist Emma Sweeney guests on one track, Trio Seven. The album also features guest vocalists on four tracks, JP Cooper (newly signed to Island Records), Sharlene Hector (Basement Jaxx), Fridolijn Van Poll and Sophie Barker (Zero 7).
For his new album, City, McCallum steps even further into the world of electronica, whilst still maintaining that magical combination of both acoustic and electronic instruments that gives his music such a distinctive sound. However, two things make City stand out from his previous work. First, the addition of vocals and second, the decision to bring in London based drummer and producer, Richard Spaven, who he met during his time playing with Cinematic Orchestra, not only to perform, but to co-write and produce the album (all tracks are co-written by McCallum and Spaven apart from City).
Key tracks on the album include the evocative City; sampled extracts of JP Cooper's 'Something You Can't Have' play like glimpses of a city snatched from a car window. North Star, featuring Sharlene Hector, was written the old fashioned way, after studio computers decided to take an unscheduled rest. Effergy is simply sublime, an ambient meditation with McCallum's guitar hinting at something darker beneath the surface, with haunting vocal textures by Fridolijn Van Poll, while Said and Done features the otherworldly vocals of Zero 7's Sophie Barker.
Stuart McCallum's music has always thrived in that beautiful space where genres blur. With a wide range of influences from Machinedrum, Lau and Martin Simpson to Debussy, Taylor McFerrin and Burial, it's not difficult to see how this has come about. His 2011 Naim debut, Distilled, was a series of beautiful instrumental soundscapes and glorious melodies that owed as much to dance music as it did to jazz. Since then he has been busy with a wide range of other projects, including several collaborations with British artist Linder, scoring music for the Northern Ballet and working in an acoustic duo setting with Mike Walker.
Spaven has played with a host of artists, including 4hero, Mark de Clive-Lowe, Flying Lotus, Gregory Porter, José James and Robert Mitchell. His production style lies somewhere between the realms jazz and electronica and subtly bridges the gap between these two worlds using grooves that blend contemporary jazz and bass-heavy downtempo electronics. The melodies and layered harmonies from McCallum's guitar, as well as synth pads and bass, are all driven by Spaven's hypnotic grooves and provide the perfect foil for McCallum's often delicate and captivating sound.

Bandcamp Daily  your guide to the world of Bandcamp